DJAMBAWA MARAWILI (born 1953) is an artist who has experienced mainstream success (as the winner of Best Bark in the 1996 Telstra Art Award) and as an artist represented in most major Australian institutional collections and several important overseas public and private collections. However first and foremost Djambawa is a leader, his art being a tool he uses to lead. Through his work, the law and stories are told.

Djambawa has been a crucial participant politically in the land rights movement, as well as being a leader of the Madarrpa clan, a caretaker for the spiritual well-being of his own and other related clans, and an activist and administrator in the interface between non-Aboriginal people and the Yolnu people of North East Arnhemland.

Djambawa has had numerous exhibitions in Australia since 1984. His work hangs in all State galleries, the National Maritime Museum, Sydney Opera House, Kerry Stokes Collection, The J.W Kluge Collection - Virginia, and many other public and private collections in Australia and overseas. 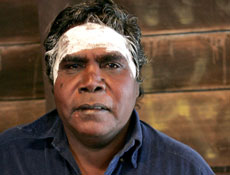