“My father Milirrpum was, in my life time was the ‘third’ elder or clan leader of the Rirratji\u
mala, after Mawalan #1 and Mathaman. After the deaths of Mawalan, the original plaintiff in the
countrys first land right case and of Mathaman it was my father who represented his people in
Darwin’s Supreme Court. Milirrpum vs Nabalco. His spiritual birth place was in Rarrkala, up
near the Wessell island group with the Bararr\u clan Mil\urr (birth place). Milirrpum was a
strong law man of his people, a wise man, a very good turtle hunter and fisherman who fed a
lot of people in the old Mission days and a good father to immediate family and to the
community.
Milirrpum died in1983, my mother the Rev Liyapadiny Marika (ne Gumana - Gawirrin’s sister)
dying in 1998.
I left Nhulunbuy High School in 1983 completing 4th year. I continued tertiary studies in ‘84,
‘85 and worked in community areas of housing and roads. Part of 1985 was spent at my
mothers homeland of Gangan as a training teacher at Primary level. In 1988 I spent 6 months
down south performing traditional dance around schools in different states with Ralph Nicholls,
son of Sir Douglas who was an Urban Yol\u who was using a lot of Arnhem Land boys and
their talent in bringing them down and performing for many years. So I happen to be one of
them. In 1989 I found work as a plant operator with YBE (Yol\u Business Enterprises), driving
bulldozers, graders and trucks etc. In 1990 I moved into the Environmental section to do rehab
work, planting seed and growing trees at the mine site, cutting lawn in the town area for the big
bosses in Nabalco, and driving the garbage truck around the mining town Nhulunbuy. In 1991 I
did some general accounting and clerical work at the YBE office which included paper work re
contracts given to YBE by Nabalco. I also took readings at the mining plant for caustic leaks
and temperature. I have studied through TAFE and attained an Associate Diploma of
Community Management. !995 saw me elected as a community high level leader as Yirrkala
Dhanbul Community Association Council Chairman for the following three years. In 1998 I
moved to the homeland side to establish a new homeland with my mother at Yinimala 17k
west of Baniyala and 200k south of Yirrkala. Currently I am a councillor for Laynahpuy
Homelands Council.
My fathers taught me how and what I can paint. It was for Buku-arr\gay Mulka’s ‘Saltwater’
bark painting project that first had me painting publically on a serious level. Living much of my
time today at Bäniyala (my wife’s country whose father is Wakuthi). I paint amongst the Ma
[arrpa clan artists as well as my own when living at Yirrkala. I am the Buku-arr\gay Mulka
Artist Committee Chairperson. “

Wanyubi’s innovative application of his clan law in fine art renditions has set him apart as an
artist to watch from the beginning.
His ‘arrival’ in Saltwater and establishment in Buwayak was reinforced with his first solo show
at Annandale. 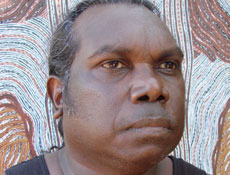