Dhurrumuwuy’s father is senior Rirratjingu statesman and Yirrkala councilor, Bakamumu Marika . His grandfather, the late Roy Dadanyga Marika (c.1931-1993), is known as the Father of Land Rights. Dhurrumuwuy’s mother is Djuna Wunungmurra , a daughter of Yangarriny Wunungmurra, one of the region’s most important artists (1996 Telstra NATSIAA First Prize winner). The renowned Dhalwangu artists, Nawurapu and Djirrirra Wunungmurra are also the son and daughter of Yangarriny.


Residing away from Yirrkala, at his mother’s Dhalwangu homeland of Gangan, Dhumurruwuy is surrounded by community artists of high integrity and talent led by Gawirrin Gumana AO. He is the latest of a younger generation recognised as possessing a real talent and desire to make art. His first works, produced in 2007, had already achieved high levels of artistic merita nd cultural integrity. His subsequent work has continued to build on these qualities.


He is one of the few members of his clan to reside at Yirrkala and his father is not an artist so his exploration of the design of Rulyapa the water between Yirrkala and Dhambaliya (Bremer Island) has been something of a lone exercise.


He traveled to Annadale Galleries for the opening of the Young Guns II exhibition and this fuelled his interest in being involved in the creation of fine art. He has completed commissions and exhibited at Annandale as a headliner with Gunybi Ganambarr and Boliny Wanambi. He also exhibited with Indigenart in 2009 and 2011. 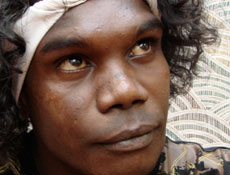