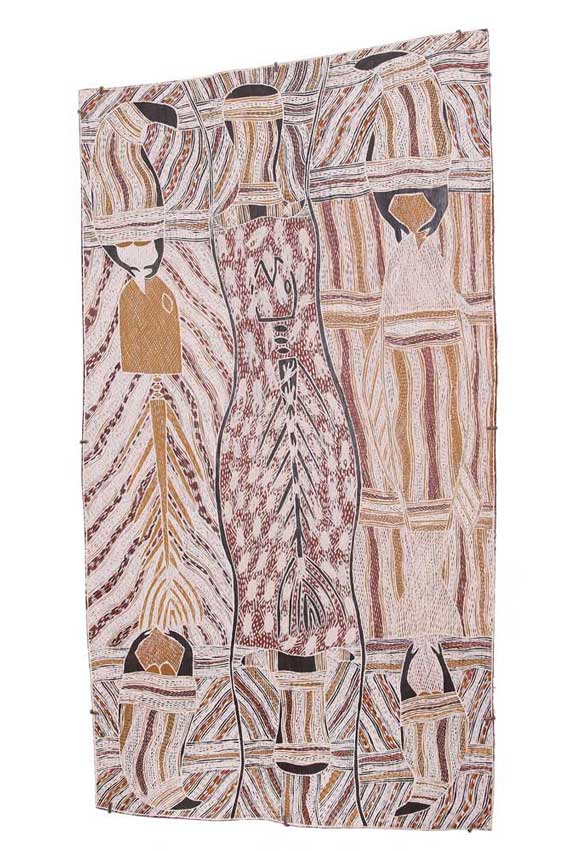 Galuma was one of the first Yol\u women to be instructed to paint (by her father) the sacred clan designs that were previously the domain of high ranking men. In preparation for her first solo exhibition of her art she rang through to Buku-Larr\gay the following statement:

This is what I really learnt from my father.

First when I was still in school at Yirrkala he used to let me sit next to him, me and my brothers and he used to show us all the paintings from Wayawu and Djarrakpi. And he'd say this is our paintings and I'm telling you this about the paintings for in the future when I'm passed away you can use them.

Then I forgot all this when I was in school - then I stopped but I was still thinking the way he was teaching us. Then one day I decided to start on a bark by helping him at Yirrkala. Every afternoon after work I used to sit with him and paint little barks - mostly from Djarrakpi but a little from the freshwater country at Wayawu but not Mil\aywuy.

Then I was keep on doing it over and over on cardboard until my hand it gets better and better and I put it in my mind, then it was working and I kept on doing it.

I went to Djarrakpi with my family to live with my father and my mother and brothers. My brothers passed away and we had to go back to Yirrkala. I left my father and mother there when I went to live at Båniyala. My husbands family were living there. I was teaching at the Båniyala school still doing a little bit of painting but mainly schooling. When my father and family died I stopped painting - just doing school work.

Once I moved to Dhuruputjpi in 1982/3 I started to paint again because no one else was doing it and I was thinking about the way my father was talking and how did he handle all this. How did my father do all this - travel and paint - how to handle this painting so I kept on thinking. I'm not really prouding myself but I want to do this painting as my father did it and to keep it in my mind. But I really want this painting to keep going. My gurru\ (Djambawa Marawili) he is looking after it as his Måri (mothers mothers side) and others are looking after it also. I have to teach my kids in case some one might steal the designs. So my kids can know what their mother's paintings is. 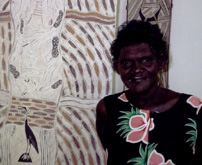