Boliny’s father was the late Marrakulu leader and artist Mithili. She spent her childhood at the Marrakulu homeland Barraratjpi which is based on the inside of Cape Shield on Blue Mud Bay. The new homeland of Gurka’wuy was established in the early Seventies by her father and other artist elite Dungiwuy and they lived there together.


Boliny is the widow of Birrikitji - Dhalwangu clan leader up to the early eighties. Boliny has worked at the women’s resource Centre, creating hand painted ceramics, and helps with the women’s program. Boliny is a prolific artist also working with natural ochres on bark, lino-cut images and wood carvings.


Boliny’s successful joint show with her sister at Framed in June 2006 saw her achieve a measure of the recognition she deserved. She was an assistant to various other artists over the years including on prize winning works by Banduk Marika and probably her brother Wukun but had generally stayed out of the limelight. That show in Darwin was widely acknowledged as one of the best exhibitions of the year and completely sold out two large rooms of work. This success was repeated at the same venue in
2008 in the Marrakulu group show featuring Boliny. In 2009 she exhibited at Annandale Galleries in Sydney where her work sold out inclusing to the National Gallery of Australia. The catalogue for that event included an essay which said, “Boliny is a mother figure to the community. She has raised countless children and grandchildren with a sweet, effortless energy. Amongst these are her younger brothers Wukun Wanambi and Yalanba Wanambi who are each now well known artists. Her patience and persistence and humility grind on. Thankless tasks and hopeless causes are the grist from which she produces regular triumphs. It is in her hands that the marginal becomes bountiful. Those of us who have experienced her loving solicitude are joyous that she overcame a serious health threat. Her intelligence and humour make her wisdom all the sweeter. All of this ingenuity and diligence is in her work which is her constant companion.” 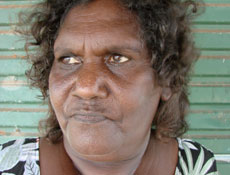