Ralwurrandji Wanambi (born 1959, began exhibiting 1999) worked for many years at the Yirrkala art centre Buku-Larrnggay during the 1980's and early 90's. She and her sister Boliny and brother Wukun became some of the most prolific and popular artists at Yirrkala. She works consistently and divides her time between Yirrkala, while working for the local hospital, and her husband's homeland of Yilpara.

Ralwurrandji is a very devoted mother and grandmother and an important source of community strength in ceremony and daily life. She has been a stalwart of all of Buku's projects over the last two decades and figured in important solo and group shows of her own.

Despite struggling with illness in 2011 she entered a brand new phase of energised activity and recast her style, which had always been evolving, into a contemporary textured pared back imagery. It is speculated that this was partially a result of Gunybi Ganambarr's close presence during the extended illness and subsequent death of her dear sister Boliny.

The new works have an extraordinary presence, recalling for some the colours of Native American art and for others the textiles of Indonesia. However one responds to the works, they have a vitality and originality that make them some of the most vibrant works to emerge recently from NE Arnhem Land. It is therefore fitting that she is exhibiting alongside her great friend and famous innovator Gunybi Ganambarr. 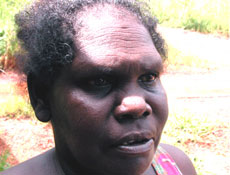