LOFTY Bardayal Nadjamerrek was born around 1926. His country is the Stone country around the Upper Mann and Liverpool rivers but he travelled widely in Western Arnhem Land and and lived with his wife Mary near Oenpelli. He has now returned to his original country and resides in Kabulwarnamo in Western Arnhem Land. He is a senior elder of the Mok clan.

Bardayal was awarded the prize for best work on paper at the Telstra Aboriginal and Torres Strait Islanders exhibition in 1998. He was also commissioned to do a painting which appeared on the Australian 40c stamp in 1982. 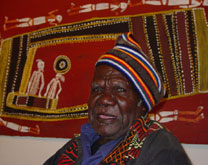