ROTRAUT was born in 1938 in Germany. Her brother is the well known artist Gunter Uecker and she met Yves Klein in Dusseldorf in 1957, subsequently marrying him in 1962 until his untimely death in 1964. They had one son.

In 1968 she met and married Daniel Moquay, a well known and respected curator on the International art circuit today. They have three children of their own. Rotraut's main studio practice is in Arizona but she also lives and works in Paris and Sydney. The 2004 exhibition at Annandale Galleries was her first exhibition in Australia.

Rotraut has participated in numerous solo and group shows since her first group show in Nice in 1958. Rotraut's work is represented in numerous public collection in the USA and Europe including the Pompidou museum in Paris and private collections in Australia, Belgium, Canada, France, Germany, UK, Monte Carlo, Spain, Switzerland and the USA.

A fifty-eight page monograph published by the Guy Pieters Gallery in Digue, Belgium and Saint-Paul de Vence in France accompanies this exhibition and is available from Annandale Galleries (and from this website, please visit our publications page). 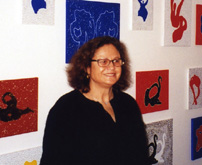