I was born in Brisbane in 1953 and studied painting at the Canberra School of Art.
After several years working at the National Gallery of Australia I travelled to the U.S.A. and Europe. Among

the works I remember seeing is DANCE, at the Brooklyn Academy of Music. A work choreographed by Lucinda Child to the music of Philip Glass, seen through a movie directed by Sol LeWitt, of the dance itself. Projected on a scrim drawn across the proscenium, the dancers, who were elevated by perspective, moved pearl-like within the projected images of themselves.

In 1980 I began studying art at Alexander Mackie College of Advanced Education where I completed a Masters Degree in 1985. During that time I was awarded a grant in collaboration with Wendy Borema by the Theatre Board of the Australia Council to construct and perform a puppet theatre. We made work described as ‘’object

theatre’’ that had attracted other artists in Sydney, among them Kim Carpenter and Richard Hart who’s Angler
Fish Ballet I also remember. My own work became the subject for early exhibitions at Roslyn Oxley9 Gallery, Garry Anderson Gallery and Ray Hughes Gallery.

To date there have been 48 solo exhibitions. Ten of them were at Ray Hughes Gallery (now Hughes Gallery) where I also took part in group shows and travelled
with Ray’s entourage of artists to his first pirate show
at the Venice Biennale. A chance meeting through Ray with Euan Upston, a theatre director from New Zealand who was interested in working with artists, resulted
in a number of projects that were instrumental to the construction of works in this show. One of the works we made together, a film called A Parade, brought an invitation to attend the Cork Film Festival in Ireland. On my way back to Sydney I stopped in Manila to visit an art school lecturer and friend of mine, Keith Looby.

Manila was a revelation, an anarchic party where I
quickly discovered a vibrant art scene that embraced
me. My first exhibition there was at the Australia Centre attached to the Australian Embassy, which like the Alliance Francaises and the Goethe Institute exhibited the work of local artists as well as their own nationals. From there I approached local galleries and began showing with Galleria Duemila in 2001 where I have had five of my ten shows in the Philippines. Following my 2005 exhibition with Duemila, No borders, a residency at Rimbun Dahan in Kuala Lumpur introduced me to Malaysia and Taksu Gallery who now show my work in Singapore and K.L.

Travelling backwards and forwards between Sydney
and Manila I began to wonder about Ian Fairweather’s painting Anak Bayan that hangs in the Art Gallery of New South Wales. The title is slang, meaning ‘the people from here’ ‘from the Philippines’ where Fairweather lived and worked during the 1930’s. Fairweather was there
at the inception of modernism in Filipino painting. Did he join the art scene and contribute as he had done

a long shadow. Overtly Anak Bayan depicts the Black Nazarene procession, with bare foot devotees following an effigy of Christ, unseen carrying the cross to his fate. Inside the work, Fairweather – although an avowed imperialist - painted his empathic recollections of the people he had lived among inTondo. He later found

a similar empthy in MalayTown in North Queensland. These recollections became the subject of his work as he painted towards his now definitive art. Fairweather realised the ambition of our time, an art that reaches across national boundaries and monocultures.

I have now been to some of the remote places Fairweather visited, including the top of Tai Shan, the sacred mountain in Shandong Province where he found refuge from a storm as recalled in his painting Monastery. Also Tawar and its the bay, where he sailed overnight
on a prahu to join the Baynain, a ship that would take him across the Sulu Sea to Zamboanga. Having visited many places in Asia which he painted, I can report
that he painted always with deadly accuracy but on occasions from a fictional point of view. Demonstrating
I believe that forgetting is as potent a creative force as remembering. 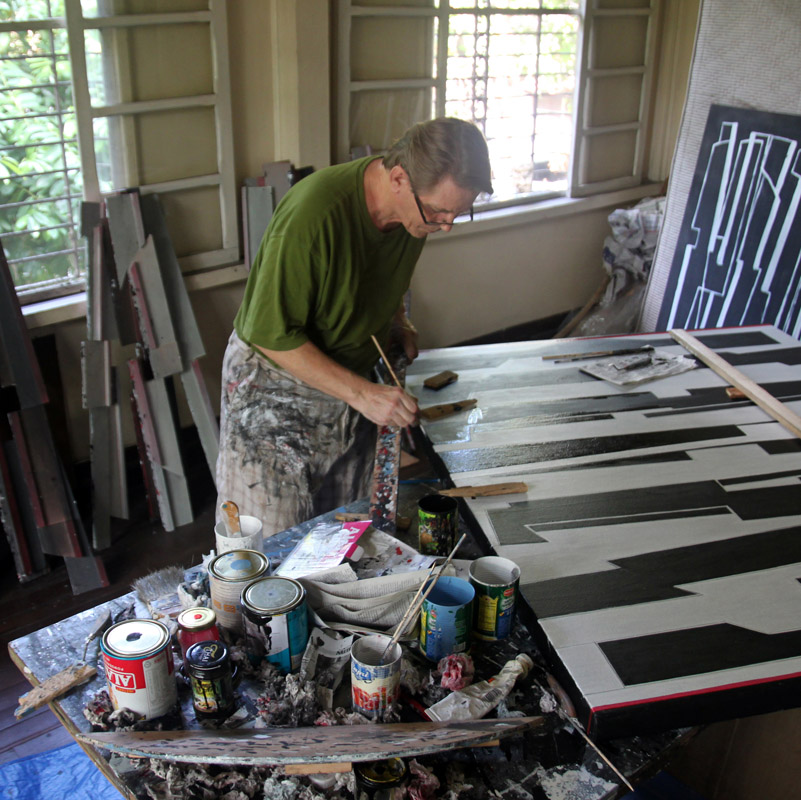