Michael was born in Jerusalem in 1943 to a Jewish Mother and English Father; and lived and worked in Paris from 1963. He now divides his time between Paris and his home on the Brittany coast. This is his third solo exhibition at Annandale Galleries and his fifth exhibition in Australia since 1987. Our commitment to his work and the enjoyment and inspiration it has given us goes back over twenty years - a fact that speaks for itself.

Over the years, Michael Weston has built up a devoted following of admirers and collectors. His works have an extraordinary accessibility due to the air of mystery and ambiguity, encouraging a varied readings and a response more emotional than mental or intellectual. His Father, who was a painter who passed away in 1967, has influenced him and the figurative heads may evoke for some viewers tribal art or Picasso. The landscape works may recall anything from Nordic masters such as Emile Nolde through Whistler and Maurice Denis to the English St. Ives school and coincidentally some of our own painters such as Fred Williams or Tony Tuckson. These influences are only a matter of viewer memory, often unconscious, creating accessibility to what appear as enigmatic works. They are never clearly defined for Weston or the viewer. We are always searching, with the artist, to clarify this unique vision.

In the past, Michael Weston has used a variety of supports such as the tiles from his Paris studio floor, wood and conventional oil on canvas. The current exhibition is framed works in oil and pastel on a special linoleum based paper he acquired in Finland. The landscape works in particular reflect the moving of his base to Brittany and evoke in an abstracted manner the windswept sea and harbour vistas that have inspired so many other artists. 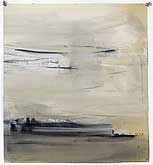