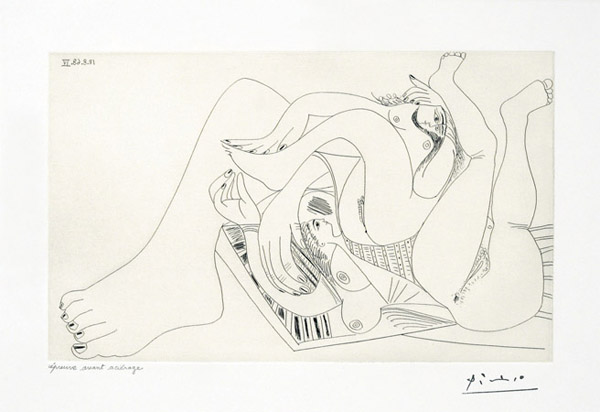 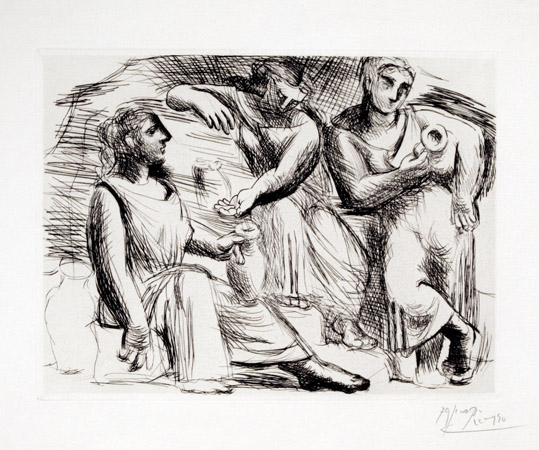 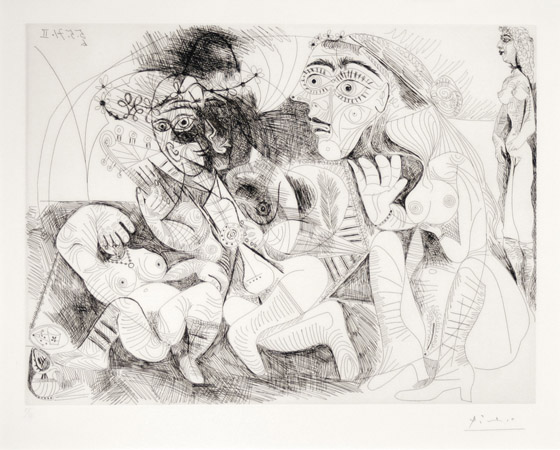 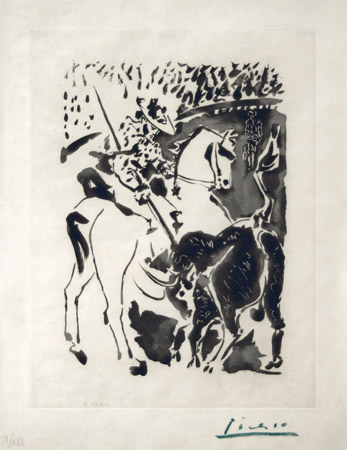 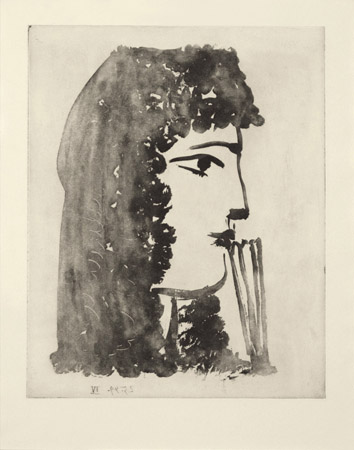 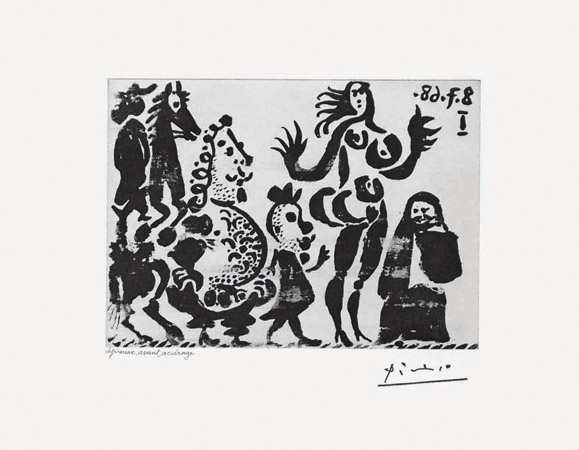 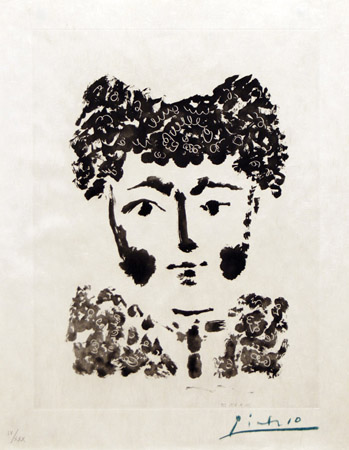 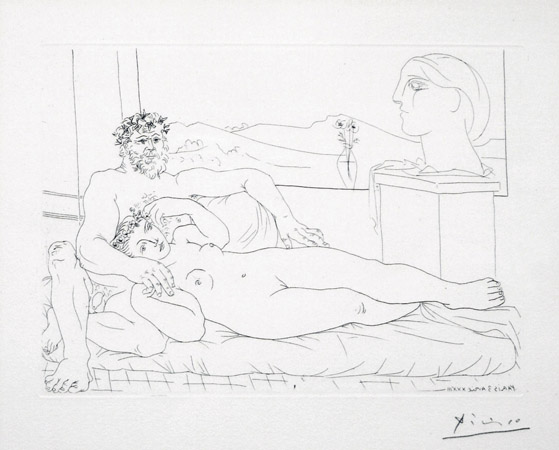 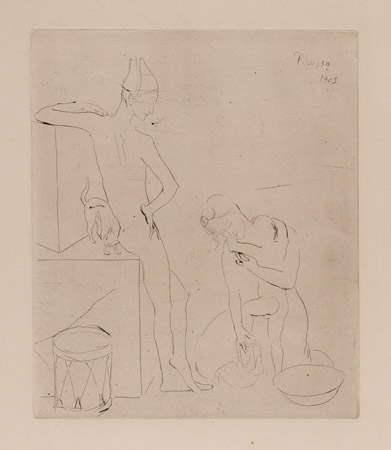 At the time of his death in 1972, Pablo Picasso was the most famous artist in the world. But artists who are celebrated in their day are sometimes treated cruelly by history. Reputations can quickly fade. However, as time goes by, Picasso's stature only continues to grow.

A friend of mine illustrates Picasso's stature by way of the one hundred-metre dash runner, Usain Bolt, at the 2008 Olympics. As Bolt crossed the line in record time, the rest of the field "the world's fastest humans" - were all about three metres back - a huge distance in that event. So it is with Picasso.

The twentieth century had no shortage of great artists. Depending on one's view, the very great might be reduced to a group of half a dozen. But when even these are compared to Picasso in terms of influence on other artists, impact on culture and the imagination of the public, they all collectively run a distant second. Picasso is the undisputed leader - a genius of his time.

In 1988, there was an exhibition at the Pompidou Centre in Paris entitled Late Picasso dealing very much with his work in the sixties and the early seventies. At the time, some critics derided this late work as coming from someone well past his prime - the reduced faculties of old age affecting the work. However, by the late eighties, the rise of neo-expressionism cast Picasso's late work in a new light. With some hindsight, the entire neo-expressionist movement may be seen as heavily influenced by Picasso. Far from the daubing of an old man (the same thing was said about the masterpiece cut-outs of Matisse), his work was full of fresh vibrant energy and hugely innovative right up to his death.

It was Picasso's ability constantly to find ways to re-invent himself that is the hallmark of his work. Acutely aware of art history, he did not hesitate to take on the past, assimilate it and make it his own. He was also a sophisticated copyist and wanted to measure himself against the great art of the past and situate himself in the continuum of the entire human creative endeavour. To this end his work addressed everything from Roman art, neo-classicism, and the old masters such as El Greco and Poussin through to Delacroix, Manet, Van Gogh and Cézanne.

To consider Picasso's graphics is an ideal way to study the evolution of this great master's oeuvre. He was fascinated with various print media and acutely aware that these allowed him to come up with styles and effects that could not be obtained through painting and drawing. Etching, aquatint and lithography is an entirely different vocabulary. The processes themselves are complex and images may change dramatically through the use of the inks, the pressures of the implements creating the line and the type of paper used as a support. In addition, all printmaking is to some degree collaboration between the artist and the printer, much depends on the ability of the artist to translate the vision to the master printer. Picasso astonished the foremost master printers again and again. Not only was he able to master the difficulties of new techniques and mediums with ease, he went on to obtain results that were previously thought to be impossible. Georges Bloch, who collated and published the catalogue of the printed work said; "A virtuoso in every technical process, he elicits from his material the very subtlest effects it is capable of yielding. It is therefore hardly surprising that he puts his trust in unceasing experiment and that five, ten or even thirty states are sometimes necessary before a masterpiece emerges from this severest of self-critics?."

Picasso was involved in printmaking for virtually his entire career. The Bloch catalogue lists over eighteen hundred works. To follow this journey to any degree, one begins to understand Picasso's method, a constant quest for new forms of expression. This quest in the prints has enormous influence on the rest of his oeuvre. The ideas for paintings of Picasso often come from the prints, not the other way around as many people imagine. William Kentridge, another absolutely committed printmaker from our time shares this with Picasso. Sometimes a set of etchings by Kentridge is inspired by one of his films or performances but just as often a set of prints are the catalyst that inspires the film.

Therefore, the importances of the graphic oeuvre of committed printmakers such as Picasso, Miro, Chagall, Matisse and more recently Kentridge cannot be underestimated.

The experiential process of printmaking allows for a freedom that is very different than painting. A painting is usually more self-contained whereas prints are often done as a series of thematically connected images. Therefore there is a lightness of touch, a spontaneity and freedom with ideas that is, in part, inspired by the medium. The idea of the 'stand alone' painting means that the struggle is often absent to the viewer from the finished work. A painting may be changed and done over a period of time before the artist is happy but the idea of doing up to thirty states of an etching before the final masterpiece emerges means that the artist is both more free to experiment and be surprised himself but that crucially, the emotional state of the artist at the time is more evident. As the idea changes and mutates so often during the process itself, there is more room for us to get an idea of the various emotions of the artist that in turn affect us emotionally. Printmaking is probably the most direct form of working in visual art apart from the sketchbook where images are generally much less substantive.

If you want to experience a real window into the soul of the artist, there is no better medium in my view than that of printmaking. It can be spontaneous and carefully crafted. It can be mysterious and retain intellectual clarity. It can highlight ideas and veil them at the same time. No other finished medium is so personal and yet so universal - the works are a culture of opposites and conundrums.

The printed work of Picasso demonstrates a clearly defined succession of periods in which a certain technique usually predominates. While not comprehensive, we have examples in this exhibition of most periods to give the viewer an idea of his progression. The main periods represented here are as follows; The Suite de Saltimbanques 1904-1906; Suite Vollard in the early thirties, a suite from Le Carmen des Carmen from 1949; the late prints from the 1960's including examples the 347 and the 156 series.

It is an extraordinary collection of works. Le Repas Frugal is included which is the first etching in the catalogue raisonne by Bloch. There is a marvellous work La Source from Picasso's neo-classic period. His women are well represented; the portrait of Francois Gilot on the cover from 1947, the similarities to Jacqueline in some of the later works and ceramics and The Couple maybe a reference to an earlier muse, possibly Fernande Olivier. Marie-Therese is the model for The Flautist from 1933.

In addition, there are several rare drawings and a monotype that give us an idea of how printmaking interacts with drawing in the graphic medium.

Finally I would like to thank Leslie Sacks and Sandy Shin of Leslie Sacks Fine Art for their support in making this exhibition possible. It is my hope that the exhibition will provide fascinating additional context for the massive exhibition running concurrently at the Art Gallery NSW. 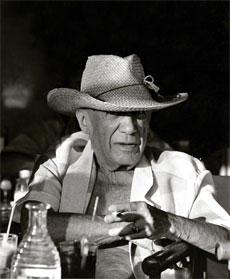